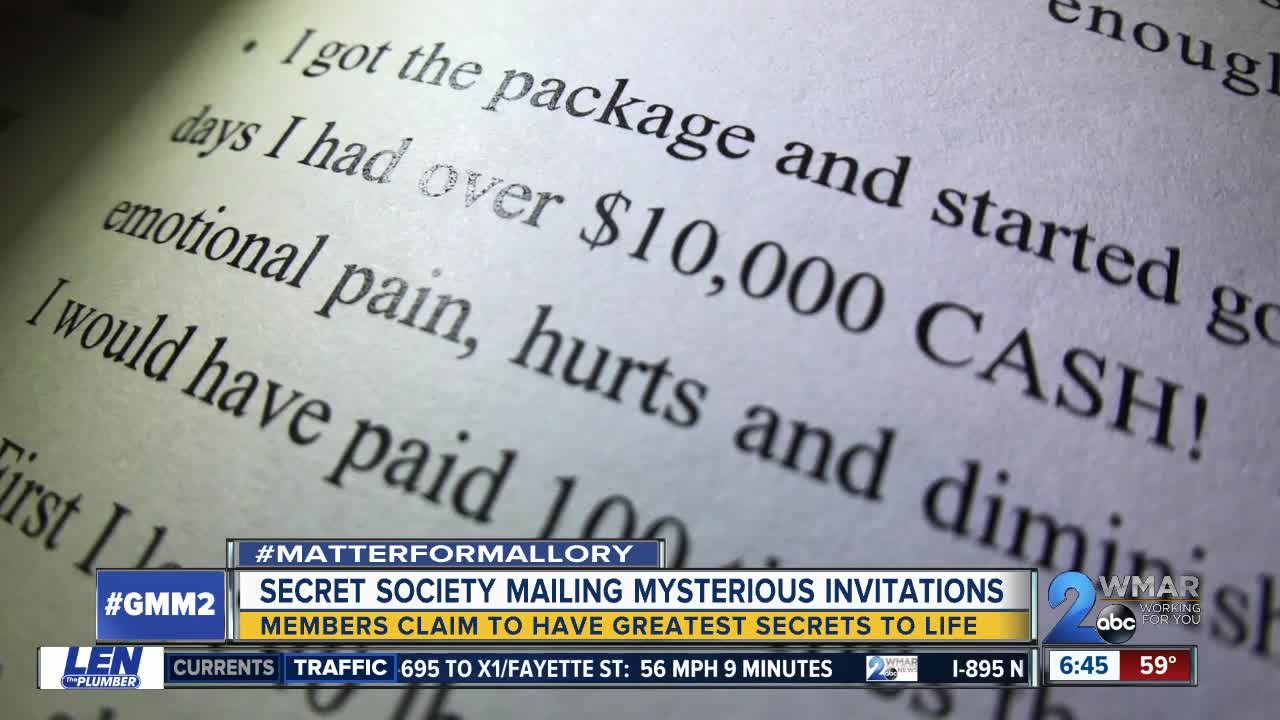 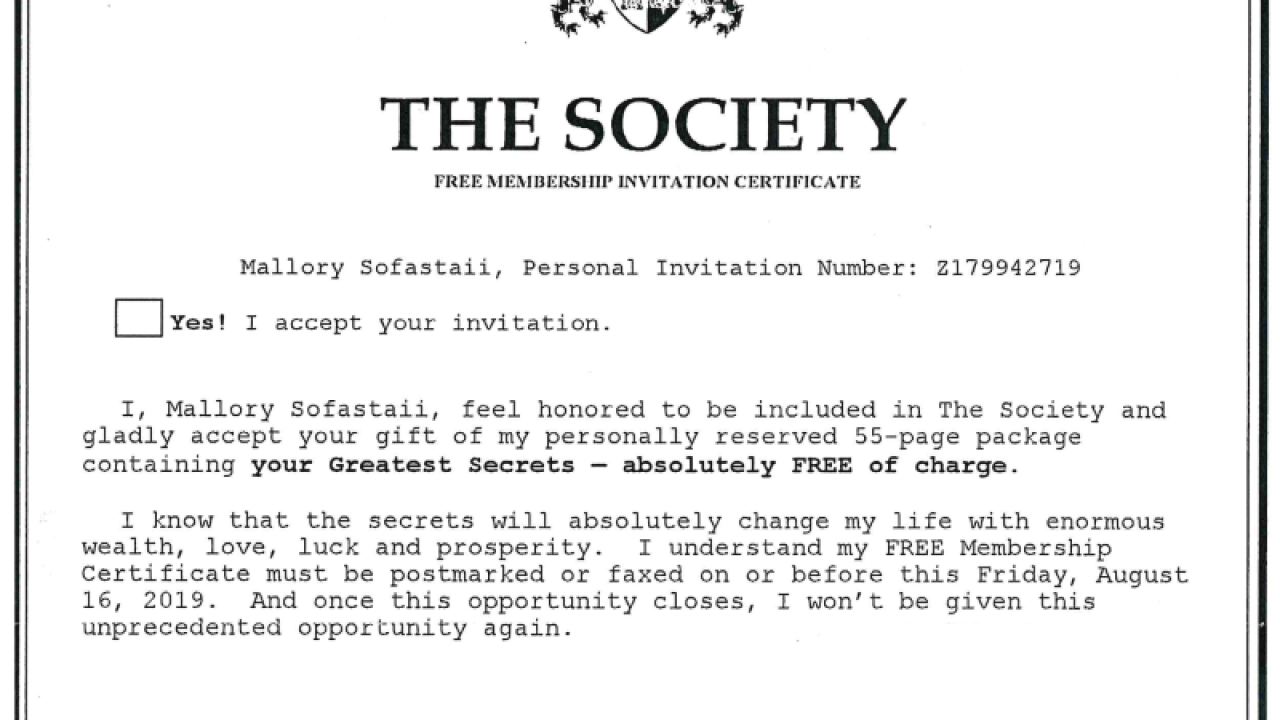 BALTIMORE — A “secret society” has been mailing invitations to prospective members revealing the existence of an exclusive association and promising to share the “greatest secrets of life.”

**If you sent money to join”The Society,” WMAR-2 News Mallory Sofastaii wants to hear from you. Email her at [email protected]**

The letter claims the association is made up of some of the world’s most famous and powerful people including renowned actors and musicians, millionaires, Casanovas, and statesmen. And they want to share the world’s most powerful secrets with its members free of charge. The letter is signed by “Tom” and came from a PO Box in West Valley City, Utah. The organization goes by the name “The Society” and “The League,” but there’s no other information about the sender or business location.

WMAR-2 News Mallory Sofastaii received this letter over the summer. She decided to accept the offer and a few weeks later, she received a 55-page booklet in the mail. Again, the group promises to give members the secret to becoming “100 times richer by doing absolutely nothing,” “losing 40 pounds in 4 weeks without even trying,” and becoming “so famous that rock stars are begging for your autograph.” However, by page 17, you learn that secret isn’t free. You’ll need the full 1216-page manuscript that’s available at the discounted price of $139.95. After the deadline, the price goes back to $240.

Richard Vatz, a professor in communication and rhetoric for Towson University, said people may pay because they’re intrigued by the mystery.

“People think they’re getting in on something that nobody else knows about,” said Dr. Vatz.

The letter has been written about before when it was widely circulated several years ago. Now, it seems to be back.

The Better Business Bureau and others have connected the pamphlets to Mark Hamilton, founder of Neothink Society, according to his pseudo-Wikipedia page. Related businesses include Integrated Management Associates, Inc. and Neo-Tech Publishing Company.

In a YouTube video viewed by millions, Hamilton claims to have a 3,000-year-old secret. However, the big secret is more smoke and mirrors.

“It says that if government acts less, we’ll do better,” said Vatz. “There’s nothing in this philosophy that guarantees you wealth, but it’s the type of philosophy where if you’re only after wealth and you don’t care about your fellow human being, you might wish to adopt.”

WMAR-2 News reached out to Hamilton and several others affiliated with the business to ask why they didn’t include their names or additional information in their letters, but no one responded.

Waking up to immediate wealth is something most would question, but there are always those willing to believe.

“And if you said you should be ashamed of yourselves, they’d say you just don’t understand, do you? If you had the secret and you used it, you’d understand,” said Vatz.

While the letter is dishonest, it doesn’t appear to be illegal. There are a number of people online who have said the books “opened them to a whole new world,” however, WMAR-2 News has not been able to verify those reviews or the hundreds of comments on Hamilton’s YouTube video.

If you have a Matter for Mallory, she wants to hear from you. You can contact her using the form below or find her on Twitter or Facebook.

Copyright 2019 Scripps Media, Inc. All rights reserved. This material may not be published, broadcast, rewritten, or redistributed.

Sign up for the
Headlines Newsletter
and receive up to date information.

The Society Letter in the Mail