If you ask your friend to name languages spoken in Mexico, their response would likely be confusion followed by a confident statement regarding Spanish. Curiously, they couldn’t be more wrong! Although Spanish is Mexico’s go-to language, especially among youth, it’s not a daily choice for general Mexican population.

Most people tend to think that Spanish is a sole Mexican language, forgetting, or simply not knowing, about plentiful diverse, rich, and fascinating indigenous languages of Mexico. If you are among those who, don’t click away, as today we will be exploring Mexican dialects, delving deep into this beautiful country’s linguistic heritage.

What is a Primary Mexican language?

As expected, main Mexican lingo is Spanish. It is spoken by 92,7% of  Mexican population. You can see a chart that illustrated language distribution in Mexico below. However, it is not a single official language of Mexico. Last year Mexican Chamber of Deputies declared that Mexican Constitution will recognize both Spanish and indigenous lingos. Native languages will have same legal force as Spanish. Additionally, tongues ​​of indigenous people are legally recognized as part of nation’s cultural heritage, therefore country should contribute to their study, preservation, dissemination, development, and use, as well as promote a multilingual linguistic policy throughout all Mexican institutions.

What type of Spanish is spoken in Mexico?

Mexico is inhabited by about a third of planet’s Hispanic population. Yet, Spanish dialect in this country is still different from common modern Spanish. These changes which occurred to Spanish were caused by influences from local traditions and dialects, and also occurred because some obsolete native colloquial forms were preserved. Considering Mexican Spanish’s unique quality, it’s hard to translate documents that use it. This is where certified Spanish translation services will come in handy.

What language is spoken in Mexico the most?

Mexican Spanish began to emerge from dialects of Latin America’s indigenous tribes, which changed after conquistadors’ arrival. Now situation with spoken Spanish in Mexico is determined by common border with the United States. Many modern Spanish words and phrases have been borrowed from English. 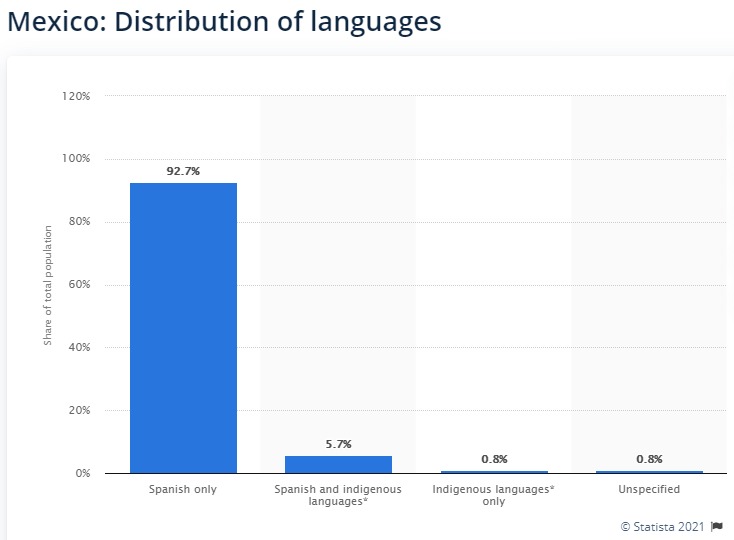 68 indigenous peoples inhabit Mexican territory, each one speaking their own native language, organized into 11 linguistic families, and are derived in 364 dialect variants. A Mexico dialect is a lingo variant that is specific to a particular community or region. There are linguistic peculiarities across Spain’s different regions, as well as Latin American countries, which are largely quite different from each other.

As of 2022, according to the National Institute of Statistics and Geography (INEGI), 25,7 million people, which are 21,5% of population, self-ascribed as indigenous. Meanwhile, 12 million inhabitants (10,1% of population) reported living in indigenous households. Also, 6,5% of national populous is registered as speaking an indigenous language or dialect, representing 7,4 million people.

When answering the question “what language do they speak in Mexico?”, one can not forget local dialects. Linguistic variants, a.k.a. dialects, are reliable indicators of an enormous Mexico’s linguistic and cultural diversity. Following studies on country’s linguistic reality and to avoid linguistic discrimination, INALI considers that linguistic variants should be treated as official, at least for education, teaching, and administration of justice, health, as well as in matters or procedures of a public nature. As many local dialects are commonly used, they are often needed when applying to various institutions or translating important documents. Check out these medical translation companies for ultimate high-quality translations.

How Many Indigenous Languages Are Spoken In Mexico?

According to official data, there are 69 official Mexican languages – 68 indigenous ones and Spanish. The most widely spoken indigenous Mexican dialects today are Nahuatl, Totonac, Mazatec, Mixtec, Zapotec, Otomí, Tzotzil, and Mayan. So, what language is spoken in Mexico? In latest Population and Housing Census carried out by INEGI, six million people are revealed as indigenous speakers, a figure that includes people over five years old. Despite this, not all foreign language-speaking communities that immigrated into the country are known with precision.

In Mexico City, 55 of 68 national indigenous dialects ​​are spoken. Those with greatest presence are Nahuatl, whose speakers represent almost 30% of total populous, Mixtec with 12,3%, Otomí 10,6%, Mazatec 8,6%, Zapotec 8,2% and Mazahua with 6,4%. View a chart below to see detailed information about what languages are spoken in Mexico in 2022. 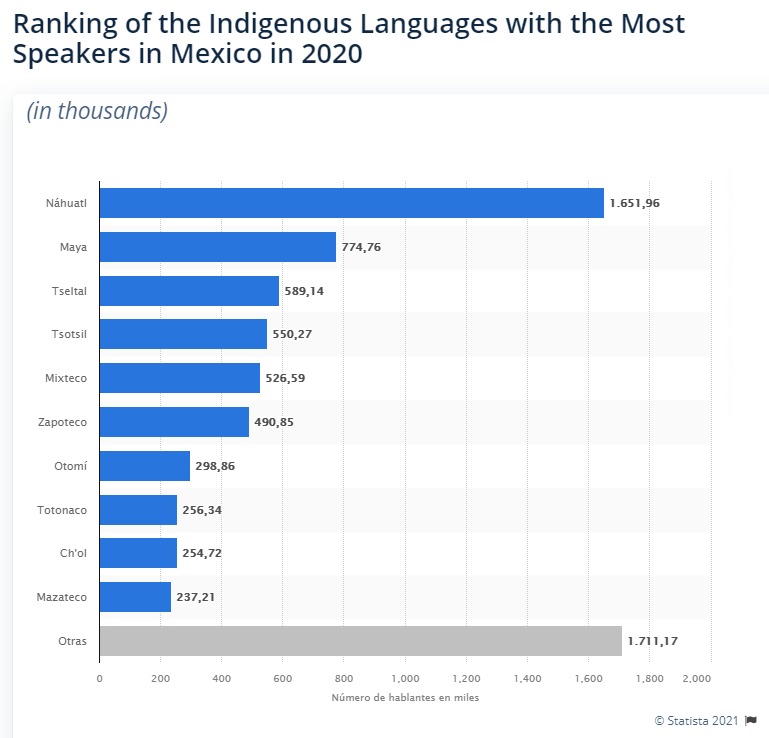 People inherit ancestral culture through Mexico languages spoken by local communities, and they should preserve dialects so that more people can learn and appreciate them. Despite the evident linguistic richness that exists in Mexico, due to various social processes such as globalization and marginalization indigenous dialects ​​face possible extinction – as many as 60% are currently disappearing.

Development of modern Mexico language took a long time. Before European colonization, Mexican dialects were ​​spoken by merchants, priests, warriors, Purépecha, Otomi, Nahua, Zapotec, Mayan men and women, among others. Of all these languages, the most widespread one was Nahuatl, since it was used by numerous Nahua groups scattered from La Huasteca to Guerrero, from Valley of Mexico to Central America.
In 16th century, Mendieta, Sahagún, and other Spaniards realized that Nahuatl was a suitable language for science or literature, as it allowed expressing oneself both accurately and abstractly. People found its similarities with Latin, confirming the former as a good choice to be used for politics, economics, jurisprudence. In colonial times it took second place of importance after Spanish.

After independence, interest in national unification grew, so Creoles, indigenous people, and mestizos were adopting Spanish. Modernist ideologies viewed native languages ​​with disdain, considering them backward and primitive. Following the Mexican Revolution respect towards indigenous languages ​​grew, however, Spanish still prevailed as main in many areas, including education.

By late 20th century, as a result of indigenous peoples’ emergence as political subjects, educational policies and discourses were slowly modified. In 1978 the General Directorate of Indigenous Education (DGEI) was created to offer bilingual and bicultural education. In 1998 its name was changed to Intercultural bilingual education.

This lengthy process defined how many languages are spoken in Mexico nowadays. Today bilingualism is still present. Spanish continues to be used by various local communities, gradually displacing original languages. If you need further help navigating through various local dialects and want to ensure accurate translation of your projects, try online translation services that are well-versed in multiple foreign languages, even rare ones.

You are probably curious, considering the vast amount and diversity of local dialects, what are the top 3 languages spoken in Mexico? They are Spanish, Nahuatl, and English. Below you can find a list of most commonly used ones in descending order.

As was already noted, majority of Mexican population uses Spanish daily. It is also considered to be among the 69 official languages of Mexico and is used throughout the country.

Popular:   How to Make Elite Frosting

It is spoken by over 1,65 million people, mostly throughout central region of Mexico. It is runner-up most spoken language in the country. Curiously, some Nahuatl words are used around the world to this day – they include avocado, cocoa, chili, tomato, and chocolate.

It is the most popular choice among not native Mexican languages. About 5% of populus speaks English, with the percentage being higher in the northern region, affected by the proximity to the United States, and in popular tourist destinations such as Cancun. Knowledge of English is often a prerequisite for employment, in tourism, and business. If you use several lingos for your business, these business translation companies can be of great help to you.

Mayan is considered one of the oldest languages in Mexico and has a written record dating back to 200 AD. There are nearly 800,000 people who still speak it, and it is the second most important native language after Nahuatl.

It spread from town of Chalcatongo de Hidalgo, in Oaxaca. It is presently used by over 500,000 people in Oaxaca, Puebla, Guerrero, as well as several states of the United States, such as California, due to Mexican migration.

This tongue is used by about 490,000 people. Zapotec linguistic grouping is the largest of the Oto-Manguean family. Its historically spoken in Oaxaca, regions of Sierra Norte, Valles Centrales, Sierra Sur, Tuxtepec, and Isthmus of Tehuantepec.

Otomi is also part of Oto-Manguean. It is spoken in Guanajuato, Querétaro, Hidalgo, Puebla, Veracruz, Michoacán, Tlaxcala and Mexico. It is presently used by nearly 300,000 Mexicans.

With a little over 250,000 speakers, it is among Mexico languages spoken in an area that includes part of Puebla and Veracruz and extends from the Sierra Norte de Puebla to the coast of the Gulf of Mexico. It belongs to the Totonac-Tepehua family.

This tongue is spoken by about 240,000 natives. Mazatec linguistic group is mostly spoken in Oaxaca, while only one variant is spoken in Puebla. This grouping belongs to the Oto-Manguean family.

Known by over 150,000 people. There is eastern and western Mazahua. Both are spoken in Mexico and Michoacán.

It has 147,000 carriers and nine variants. Tlapaneca linguistic group belongs to the Oto-Manguean family, the closest to Tlapanec was Subtiaba, but it is now extinct.

Chinanteco linguistic grouping belongs to the Oto-Manguean family and combines eleven variants. The historical settlements of Chinanteco are in Oaxaca. It has about 144,000 speakers.

Mixe is spoken by almost 140,000 speakers in Oaxaca. It belongs to the Mixe-Zoque family. The closest languages ​​to Mixe are oluteco, sayulteco and tapachulteco, the latter being sadly extinct.

It is spoken by about 140,000 people in Michoacán region of Western Mexico.

It has over 90,000 speakers, mostly in Chihuahua. It has three self-denominations and five variants.

It has about 74,000 carriers. Historical settlements of Zoque linguistic group are found in the Chiapas and Oaxaca. It belongs to the Zoquean branch of the Mixe-Zoque family and has eight variants.

Spoken by over 66,000 people, Tojolabal is considered a language in itself, because it does not group with any other variant. It belongs to the Mayan family.

It is known by about 60,000 speakers. The Amuzgo live in Oaxaca and Guerrero.

Huichol linguistic grouping belongs to the Yuto-Nahua family. It has four variants, which are spoken by approximately 60,000 people in Nayarit, Durango, and Jalisco.

Tepehuan variants are spoken by about 55,000 people. Southern Tepehuano is a linguistic group belonging to the Yuto-Nahua family. The languages ​​closest to southern Tepehuan are North Tepehuan, Pima and Pápago. It is spoken in Durango, Nayarit, Sinaloa and Zacatecas.

It has over 52,000 carriers. Chatino is spoken in Oaxaca. It is very close to the Zapotec linguistic grouping.

Due to migration, there are over 11,000 German descendants in Mexico who still use German. Another Germanic language that is considered native to Mexico is Plautdietsch which currently has about 40,000 speakers.

With 44,000 speakers, Popoloca is spoken in Puebla. This linguistic grouping belongs to the Oto-Mangue family of languages of Mexico.

It is an endangered language spoken by about 38,000 locals in Sonora and Sinaloa.

Spoken by approximately 33,000 people, it has 8 variants, 7 of them are spoken in Nayarit and one (Elcoracorapeño) in Durango.

Triqui is kown by about 29,000 people from San Luis Potosí, Pame, to Oaxaca, Zapotec. This language family is the largest and the most diversified in the country.

It has about 19,000 carriers mainly in Sonora. It is a language in itself because it does not include any other variety.

It has over 18,000 speakers in Oaxaca. Long ago it was also spoken in a part of Chiapas.

With only 17,000 speakers, it belongs to Zoquean branch of the Gulf of the Mixe-Zoque linguistic family. Historically, it’s from Veracruz.

It counts almost 13,000 speakers and belongs together with Mixtec and Triqui to the Mixtec subfamily. Historical settlements of this group are from Oaxaca.

Popular:   How to Make Elite Frosting

Other dialects are plentiful but less commonly spoken.

Having Learned About Mexico Languages

All historical tongues we discussed today are a valuable part of Mexican cultural and linguistic heritage that our contemporaries should strive to keep. Sadly, people inhabiting countries that have so many local dialects tend to scarcely use many of them due to globalization and the spread of more commonly and universally spoken languages.

However, modern Mexicans largely recognize the importance of indigenous languages and try to preserve them, making sure that their descendants would have access to these vessels of ancient wisdom and unique historical flavor.