5S is a method of organizing a workspace to make it safe, efficient and effective. The goal of 5S is to create a clean, uncluttered environment that allows people to do their jobs without wasting time, while also lowering the risk of injury.

The five words in 5S represent the five steps to accomplish this goal. They are sort, set, shine, standardize and sustain. Lean bases the words on the original Japanese:seiri, seiton, seiso, seiketsu
and
shitsuke. 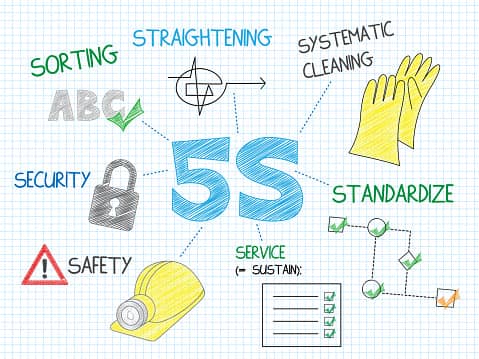 5S is a key component in eliminating the eight wastes of Lean when setting up a workstation. While it ranks among the most widely used and fundamental components of Lean Manufacturing, it’s common-sense application also works in almost every setting.

Here’s an overview of the five steps.

In this first step, workers sort everything in a workspace into what is and what is not needed. Some use a system called “red tagging” in which every item not necessary for a process gets red-tagged during the sort phase. These items are set aside and evaluated later. Workers store seldom used items nearby, but not at the workstation. They discard unsafe items and clutter.

The Sort phase is the first step to making more effective use of space by clearing out hazardous items and clutter that distracts from doing the job.

Set, or Set in Order, follows the advice: “A place for everything and everything in its place.” Workers position items based on use, with frequently needed items kept closer at hand. Every item that made it through the Sort stage is given storage space. In some cases, workers can use color-coded labels to easily identify storage spaces.

Popular:   What Does Bottoming Out Mean

The Set in Order phase creates an ergonomic, organized and uncluttered workspace where employees have what they need close at hand and know where every item is stored. This creates a less stressful work environment.

With the clutter gone and storage space organized, it’s time to clean. After a thorough initial cleaning, workers clean the station every day (sometimes twice a day). This maintains the gains made in the Sort and Set phases. Cleaning includes storage areas, machines, equipment, tools and work surfaces.

The Shine phase creates a more pleasant environment for employees, who no longer have to combat dust, dirt and clutter. Cleaning the area every day also leads to a higher level of employee buy-in for the 5S method.

This step involves creating ways to sustain the first three steps. Employees participate in creation of a set of standards that will govern maintenance of the workspace going forward. Once this “new normal” becomes a habit, all old habits will fall away. This may require oversight and enforcement before becoming a habit, however.

The Standardize phase takes the progress and changes in behavior from the first three steps and makes them the standard procedure.

In Sustain, the goal is to stick to the new rules. Workers keep the new standards in place and practice the first three steps every day until they become automatic and the accepted way of doing things. This final step often proves the most challenging. However, without sustaining the new system, all the cost and effort that went into creating it will prove pointless.

Popular:   Walking on Eggshells at Work

The Sustain phase of 5S often requires training and good communication, but it eventually will lead to employees becoming comfortable with 5S procedures.

While not complicated, the 5S system presents challenges in both implementing the steps and sustaining the practice. Putting 5S into place can not only help make people less stressed and more efficient, but will also improve workplace safety and reduce training time for new employees.

5s a Place for Everything